The co-owner of a bar on Staten Island which declared itself an ‘autonomous zone’ after its liquor license was yanked over COVID-19 lockdown violations was arrested and perp-walked out of the business in handcuffs on Tuesday night.

According to Deputy Sheriffs, Mac’s Public House general manager and co-owner Daniel Presti was charged with several offenses, including obstructing governmental administration, for continuing to operate the establishment despite being in an ‘orange zone’ – where indoor dining is not allowed and there is a 10 p.m. dining curfew, according to NY1.

To try to get around those rules, Mac’s tried to offer free food and drinks with a suggested donation.

The state stripped the bar of its liquor license last week, and the city health department ordered the bar to close.

The state Liquor Authority had said offering alcohol for free is not a “loophole” and that a liquor license is needed to sell or serve alcohol.

On Tuesday, the city Buildings Department ordered the business to vacate.

Despite that order, investigators say plainclothes deputies saw 14 people inside eating and drinking inside Tuesday night.

NY 📍: Bar owner Danny Presti is taken away in handcuffs. Watch the full following Newsmax TV interview from outside the establishment: https://t.co/LG0liSsrHj pic.twitter.com/rRrhx6XEB8

Following the arrest, approximately 50 people gathered outside Mac’s for a peaceful protest.

“You don’t selectively enforce. You have all of these big box businesses that are wide open, making billions of dollars and these people, if they don’t survive, they’re going to go to ugly extremes, and that’s what’s going to happen, it’s going to be worse than the virus itself,” said protester Scott Lobaido. 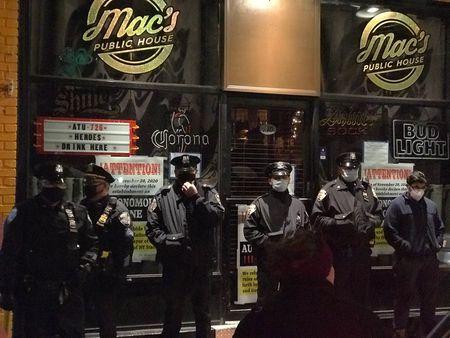 State Sen. Andrew Lanza (R) arrived on scene and delivered a speech to the crowd, which included dozens of restaurant owners from across Staten Island who came in support of Presti and co-owner Keith McAlarney.

“This order simply says that they need to cease and desist,” said Lanza. “Nowhere here is there an arrest warrant, nowhere here is anything about arresting anyone on their private property. So I’ll ask, [and] you don’t have to answer … why was he arrested? I was told you would tell me why he was arrested and now I’m asking for that answer.”Last week, the state of New York issued a Section 16 order from Health Commissioner Dr. Howard A. Zucker ordering Macs to follow coronavirus restrictions – with failure to do so resulting in possible fines of up to $10,000 per day. Mac’s liquor license was suspended on Nov. 27 by unanimous vote, according to silive.com.

Mac’s Public House is being raided by the Sheriff’s Dept in #StatenIsland !! F**k you @NYCMayor and @NYGovCuomo ! #nyc #news #politics pic.twitter.com/vRGHdg4xF6